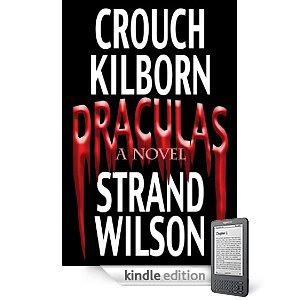 Mortimer Moorecook has been anxiously awaiting a package. When the Fedex man arrives, Mort gets really excited. Mort ordered a skull. Though the skull is not just any normal skull. It is a “Dracula skull”.

Shanna specializes in the evolution of primates. Mort hired Shanna. He wants her to research and figure out the history behind the “Dracula skull”. In her research, Shanna found some interesting information regarding the Wallachian Order of the Dragon and its founder, Oswald von Wolkenstein. Supposedly Oswald’s son had a birth defect that affected his teeth, which might account for the long incisors.

Mort suffers an attack and is rushed to Blessed Crucifixion Hospital. There Dr. Kurt Lanz examines Mort. Soon, there is a outbreak of vampires. Can anyone stop them before it is too late?

Draculas by Blake Crouch, Jack Kilborn, Jeff Strand, and F. Paul Wilson is a bevy of super star giants. I have not read a really great Dracula book in a long time. Draculas is the best one of 2010! The characters were so full of personality and I found them to be very interesting. This helped with the story. The characters were normal people just trying to survive.

Of course, I still would have been intrigued by this book as the story line was in your face… in a good way. An added bonus was that this story took place in Durango, Colorado, which is about 3 ½ hours away from where I live. It was fun to imagine that this was really happening in Durango.

Marce said…
This sounds good Cheryl. Similar to my current read Relic, my review should be up tomorrow.
October 18, 2010 at 8:58 AM