Watch out for Powers 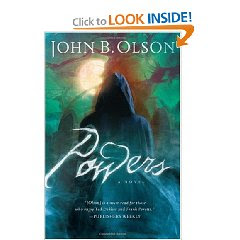 Mariutza blames herself when her grand father dies in her arms, because of The Badness. She was no where near him when The Badness came. Mariutza must find Jaazaniah the Prophet to help save her from The Badness. The problem is that Jaazaniah is a fictional character from her grandfather’s stories.

Jazz is a musician. Recently he has started experiencing visions and he has no explanation as to why. Jazz’s life changes when he meets Mariutza. Can Jazz and Mariutza fight The Badness or will The Badness consume them.

I have to admit that I had mixed feelings about this book. On one hand it had potential but on the other hand, I found that I never really could connect with the story or the characters. There were a lot of things happening all at the same time, which made it a little difficult to follow at first. What did make me keep reading this book is that I wanted to know what The Badness really was…a man or myth? I thought that Jazz and Mariutza didn’t balance out each other that well. Mariutza was the stronger of the two. Overall, I thought this was an ok novel.
John Olson

Anonymous said…
Genial brief and this fill someone in on helped me alot in my college assignement. Thanks you for your information.
January 31, 2010 at 11:50 PM