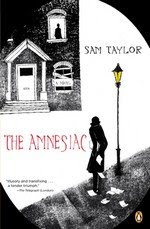 James Purdew falls and breaks his leg on the stairs of his Amsterdam apartment. His girlfriend Ingrid leaves him and he finds that he can't remember the last three years of his life. James decides to dig out some old diaries of his in order to try and remember just who this James he can’t remember was? He is drawn back to the town of H in England; it is where he spent those lost three years. Once there James stays at a house that seems vaguely familiar to him. Upon entering James discovers that the house has secrets of its own. James locates an old manuscript of a murder mystery written by a man named Malcolm Trewvey. Who is Malcom Trewvey and what is his connection to James? The closer James gets to discovering the truth, the stranger James' surroundings get. Will James be able to connect all the pieces of the puzzle back together again before it's too late?


James is like the lead in his own one man show. He's multi talented; James can play the victim, detective, and narrator. Sam Taylor's style of writing is so ingenious it's amazing. This is why, even though James is like a one man show, the more you read about James the more you start to wonder if James is really real or just a figment of Malcom Trewvey's imagination. The reader travels a mysterious winding path never knowing what lies ahead around every bend. All I kept thinking while reading The Amnesiac was “I am either in an episode of The Twlight Zone or an Alfred Hitchcock movie”. I found The Amnesiac to be an amazing novel for Sam Taylor's first one. I look forward to seeing what this author comes up with next.

Becky LeJeune said…
Ooh, Twilight Zone and Alfred Hitchcock! This one sounds great, thanks for the tip.
September 4, 2008 at 5:19 PM

The Bookworm said…
this sounds really good, I like the book cover.
http://thebookworm07.blogspot.com/
September 4, 2008 at 5:46 PM

Unknown said…
Can someone explain what happened when James went to see Dr.Lewis. Just a little confused?
September 28, 2020 at 10:16 PM