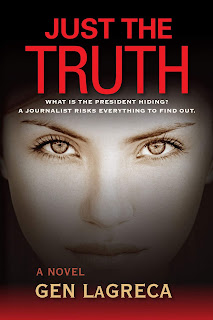 A newswoman battles powerful institutions, economic temptations, and social backlash to keep her commitment to the truth in a crumbling “free press.”

Just The Truth - by Gen LaGreca
100 years after women were granted the right to vote and in the era of “fake news,” author Gen LaGreca has written a relevant political thriller, Just the Truth, about a woman with unwavering integrity fighting against the overpowering institutional and economic pressures compromising journalism, as she uncovers suspicious circumstances that just might manipulate an upcoming election.

In Just the Truth, the businesses of Laura’s family-run corporation, Taninger Enterprises, are
the subject of covert political retribution by public officials who abuse their power and the
public trust by targeting political enemies. The Taninger family faces pressure to discourage Laura from investigating the president and his administration. Will the family members be pragmatic, try to avoid controversy, and cover up a huge scandal, or will they defend Laura? How can businesspersons and private citizens stand up to intimidation from powerful officials and partisan groups wishing to silence their views?

Talking Points:
2020 is the 100th anniversary of the Nineteenth Amendment, giving women the right to vote, a great time to celebrate women’s achievements and independence, and a big reason Gen chose to make her main character a woman.

In January, Congress held a hearing over concerns of voting machine security.
There are two approaches to journalism, represented by different characters in the book. One is the commitment to truth and the other allows bias to distort the truth. We see the latter in modern “fake news.”

Studies show that Americans’ trust in the media is dropping. This shifts the balance of power away from citizens and requires that journalists fight hard for the truth despite the circumstances.
America  faces a threat from federal agencies exerting power over private citizens and businesspersons to curb their free speech and political activities.

Attacks on free speech are happening on college campuses, where too often a diversity of views is not tolerated. 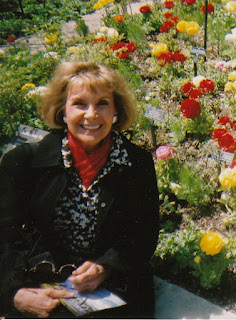 About the author:
Genevieve (Gen) LaGreca writes novels with innovative plots, strong romance, and themes that glorify individual freedom and independence. She has written novels of all different genres including historical, mystery and romance fiction as well as short stories. She is one of the successful new indie authors whose novels have topped the charts in the popular ebook format. Her three previously published novels, Noble Vision, A Dream of Daring, and Fugitive From Asteron have been Amazon Kindle Best Sellers and won 11 book awards.

The year 2020 marks the 100th anniversary of the passage of the Nineteenth Amendment to the United States Constitution, which insured women's right to vote throughout our country. So let’s take a moment to celebrate women’s achievements and independence.

The heart of a woman’s independence lies in the right to think for herself. This year’s anniversary is a perfect time to reaffirm every woman's right to think, speak, and act according to her own best judgment and to hold true to her convictions, even if that places her outside of the mainstream.

In a proud tradition that continues to this day, woman have gone against the tide for noble causes and played an active role in fighting injustice throughout our nation's history. For example, women were leaders in the abolitionist movement, enduring vicious denunciations and even physical violence when they spoke out for what they believed. In the period leading up to the Civil War, it was a novel written by one of them—Uncle Tom's Cabin by Harriet Beecher Stowe—that became an international bestseller and provided the most powerful arguments against slavery. Legend has it that Abraham Lincoln referred to Harriet Beecher Stowe as “the little woman who wrote the book that started this great war.” Whether or not we like the “little woman" tag, and whether or not the anecdote is actually true, no one can deny the tremendous influence of one impassioned woman who dramatically exposed an unspeakable injustice and had a profound influence on righting it.

Fast-forward to women writers and journalists today. When public polling shows the nation's opinion of the media is at an all-time low, there are notable newswomen who courageously hold to the highest standards and integrity. For example, investigative journalist Sharyl Attkisson, whose motto is “Untouchable subjects. Fearless, nonpartisan reporting,” has written two books containing shocking behind-the-scenes exposés of political corruption at the highest levels of government. Lara Logan, a veteran foreign correspondent who proudly declares, “Nobody owns me,” suffered a brutal attack in a war zone that nearly killed her. Her response was: "I may have been a victim that night, but I am not a victim for the rest of my life."

My new novel, Just the Truth, celebrates the storied tradition of women leaders and journalists in their fight for the truth. The heroine of the novel, newswoman Laura Taninger, risks her career, her reputation, and even her life to uncover a secret plan implicating powerful public officials in a scheme to rig and upcoming presidential election. Laura faces the crushing retaliation of her political foes as they pull out all the stops to silence her, but her resolve is unwavering. She’s an inspiration to all independent women as we celebrate our special year, our glorious past, and our boundless future.
Let’s keep making ourselves proud!
Gen LaGreca

clarabenet90@gmail.com said…
a picture is worth a thousand words. You book is very attractive and getting a few reviews on https://honestbookreview.com can really take your book to the next level. I am good with interior design for a book, would love to help out for free !