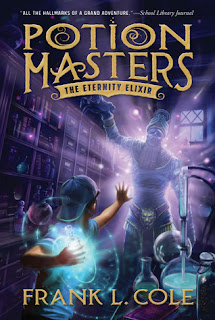 Twelve-year-old Gordy Stitser is one of the few people who knows the truth about the secret society of potion masters, because not only is Gordy’s mom on the Board of Ruling Elixirists Worldwide (B.R.E.W.), but she has also been training Gordy in the art of potion-making.

Gordy is a natural, and every day he sneaks down to the basement lab to invent new potions using exotic ingredients like fire ant eggs, porcupine quills, and Bosnian tickling juice.

One afternoon, Gordy receives a mysterious package containing an extremely rare potion known as “The Eternity Elixir.” In the right hands, the Elixir continues to protect society. But in the wrong hands, it could destroy the world as we know it.

Now, sinister potion masters are on the hunt to steal the Eternity Elixir. It’s up to Gordy, his parents, and his best friends, Max and Adeline, to prevent an all-out potion war.
My Review
This is the first book in the Poison Masters series. There is nothing better than a really good book to start a series. I had such an enjoyable time reading this book. It even helped me with my reading slump.
I love that Gordy is such a relatable character. He is so curious but smart as well. As this is the first book in this series, there was not a lot of details provided about BREW and all of the enemies. So, I can't wait to read the next book to get to know more about BREW. Plus, it was nice that Gordy's father was "normal". Meaning that he had brain smarts but when it came to potions the only thing that he could contribute was being a guinea pig for potions. One of the rules of BREW is to test potions on yourself before administering to others.
Gordy's friends, Max and Adeline were the type of friends you want. They had Gordy's back and were not afraid to help fight bad guys. Even if those bad guys might be a mummy. My nephews will have a blast with this book. Poison Masters: The Eternity Elixir will be sure to delight all readers!
Check out my Instagram post.