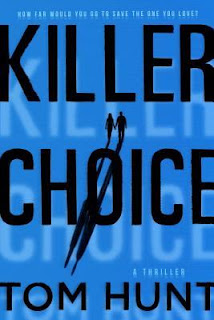 The electrifying debut thriller that asks the question: To save the one you love, is there any price you wouldn’t pay?
His wife is sick.
He needs $200,000 to save her.
A mysterious man offers to give him the money with just one catch: He has to murder someone to get it.

Gary Foster’s life is finally heading in the right direction. After years of trying, his wife, Beth, is pregnant, and he recently opened a business with his brother. But one phone call changes everything....

After collapsing suddenly, Beth has been rushed to the hospital. Tests reveal a devastating diagnosis: an inoperable brain tumor. Their only hope is an expensive experimental treatment available abroad, with a cost that’s out of their reach. And Beth’s time is running out....

Then a strange man approaches Gary and offers the money he needs, on one condition: that he kill someone, no questions asked. End one life to save another.

In this nail-biting debut novel of domestic suspense, one man makes a choice that forces him to confront the darkest reaches of his soul and betray those closest to him. As he’s swept up in a nightmare of escalating violence, he must question his own morality—and determine just how far he’s willing to go to save the woman he loves.

What a debut. All I have to say about Killer Choice is that you are making the right choice when you pick up a copy of this book! I can't wait to read what Mr. Hunt comes out with next. Instant chemistry.

After getting to know Gary and Beth and their situation, the reader really feels for them. It is hard to say if I would not do the same thing if I was in Gary's shoes. If so, I probably would be just as horrible a liar as him. He really was not fooling anyone but yet I still was cheering for him. He was gullible but kind hearted at the same time. Oh, and I just loved Beth. She drew on strength.

This book had good characters that were likable as well as a solid storyline that moved at a nice pace. You have to check this book out.
Tom Hunt