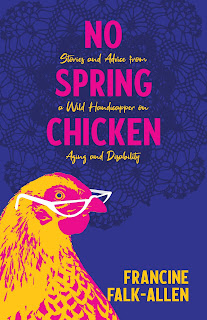 As we age, we all begin to have physical difficulties to contend with.In No Spring Chicken, Francine Falk-Allen―a polio survivor who knows a thing or two about living with a disability―offers her own take on how to navigate the complications aging brings with equanimity (and a sense of humor). The handbook is divided into three sections: Part I is a jaunt through accessible travel pleasures and pitfalls in several parts of the world; Part II addresses the adaptation people who love a handicapped or aging person could make in order to have a lighter, more mutually rewarding relationship with him or her, as well as advice for physically challenged and aging persons themselves regarding self-care, exercise, pain management, healthcare, and more; and Part III discusses the challenges, rewards and logistics of engaging with groups of people who share similar issues.Accessible and wryly funny, No Spring Chicken is a fun and informative guide to living your best and longest life―whatever your physical challenges, and whatever your age. 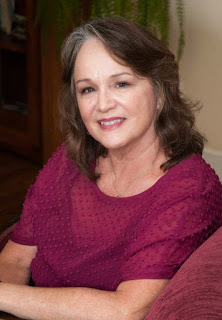 I had polio in 1951 at age three, was hospitalized for six months, and lived most of my life as a handicapped person trying to be a “normie.” I reside in Marin County with my husband, Richard Falk. I now and spend a good deal of time managing our home and garden, and a significant amount managing the effects of post-polio. And I write.

“Handicapped” or  “Disabled”?—Excerpted from No Spring Chicken: Stories and Advice from a Wild Handicapper on Aging and Disability by Francine Falk-Allen
Some people with disabilities do not like to be referred to as “handicapped,” and I fully respect that. During the disability rights movement, the description “a person with a disability” became the preferred term—a social preference I was unaware of, even as a person with a lifelong disability, until 2018. I have almost always used the term “handicapped” to describe myself, because it denotes being capable but needing an allowance for a less-than-normal condition. So, my apologies if anyone is offended by the use of “handicapped.” You do have to ask people with physical challenges what term they prefer, because it’s not the same for everyone (I hate being called “a polio,” and prefer “polio survivor,” but I know polio survivors who call themselves “polios”), just as a physically “normal” person might prefer particular descriptive terms.
Also… I thought a “Wild Handicapper” sounded more fun and kind of amusing, like an adventurous, untamed bird, and “Wild Disabler”... well, it just didn’t have a ring to it. I, along with most of the other disabled folks I know, don’t want to be thought of as not having any flights of fancy left in me. Some folks with disabilities or who are simply aging are pretty feisty, too, often because they’ve had to be in order to get through difficult circumstances. So, in my book, No Spring Chicken, I refer to myself and others to whom the material I’m covering applies (perhaps it’s you!) as Wild Handicappers.
At age three, I emerged from the polio rehab hospital with a permanently paralyzed foot, and a mostly paralyzed leg that tried its best to grow but of course never became the full-length, muscled,
functional leg that the other one has been. As a young adult, I felt robbed of my childhood in some ways, since I had to be responsible for my well-being from the time I was released, at three and a half, with crutches and a brace—new devices that I had to learn how to operate on my own. Later—in the 1960s, after becoming temporarily rid of the brace and crutches—I was kind of a wild child, as many of my friends were. I needed to re-grow up in my thirties.
These experiences shaped me not only physically but also emotionally and psychologically. It was difficult and yet, simultaneously, often irrelevant that I was a handicapped girl, and then a handicapped woman. A lot of my interactions with people and my other experiences did not happen to the average American child or woman, yet much of my life reads like just another baby boomer’s.
https://FrancineFalk-Allen.com
www.facebook.com/francinefalkallenauthor
Author of Not a Poster Child: Living Well with a Disability—A Memoir
Francine Falk-Allen