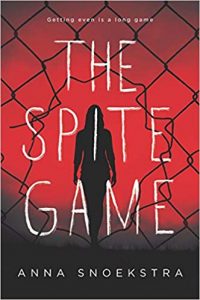 About The Spite Game

Everyone does bad things when no one is watching

Mercilessly bullied in high school, Ava knows she needs to put the past behind her and move on, but she can’t—not until she’s exacted precise, catastrophic revenge on the people who hurt her the most.
First, she watches Saanvi. Flawlessly chic and working hard at a top architectural firm, Saanvi has it all together on the surface. But everyone does bad things when they think no one is watching and Ava only wants what’s fair—to destroy Saanvi’s life the way her own was destroyed.

Finally, Ava watches Mel. Mel was always the ringleader and if anyone has to pay, it’s her. But one tiny slipup and Ava realizes the truth: Mel knows she’s being watched, and she’s ready to play Ava’s games to the bitter end.

I liked this book but I also thought it would have been better. Ava was in her right to get even with Saanvi, Cass, and Mel. They were the "mean girls" in school. Ava just wanted to be accepted. However, it was kind of hard to feel bad for Ava when she did come off as a bit desperate in school. No matter how many times she found herself the "butt" of the girls' joke, she still wanted to hang out with them. My feelings did change from desperate to Ava turned into a "mean girl" herself.

Mel is the ring leader of the group. Therefore, it would only be appropriate that she and Ava have a final showdown. You could say that there were no feelings of love lost from what punishment Ava dealt out to Saanvi and Cass.

The pacing for this book was slow. It was like a candle flickering. You are memorized by the flames but it seems like forever before you burn all of the wax. That is how I felt reading this book. It seemed to take a while before I got to the "meat" of the story but at the same time I could not stop reading. Although, this book did not knock me off my feet, I did like it enough to read another book by this author.

Anna Snoekstra was born in Canberra, Australia to two civil servants. At the age of seventeen she decided to avoid a full time job and a steady wage to move to Melbourne and become a writer. She studied Creative Writing and Cinema at The University of Melbourne, followed by Screenwriting at RMIT University.

After finishing university, Anna wrote for independent films and fringe theatre, and directed music videos. During this time, she worked as a christmas elf, cheesemonger, a waitress, a barista, a nanny, a receptionist, a cinema attendant and a film reviewer.