What is Louisiana Catch about? 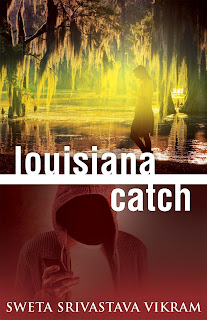 Louisiana Catch, Vikram’s debut novelwill be published April 10, 2018 to coincide with Sexual Assault Awareness Month. The book draws from Sweta's experience as a health counselor for abused women, where she employs yoga and mindful meditation as a means to heal.

The story is about a wealthy 33-year-old New Delhi woman, Ahana, who is facing the psychological consequences sustained from an abusive ex-husband, while also grieving the unexpected death of her mother.  Ahana arrives in New Orleans to run a feminist conference where her instincts are put to the test. She meets a man in an online support group, must escape a catfishing stalker and open her heart to the possibilities of friendship and love.  Louisiana Catch is an emotionally immersive novel about identity, shame, and who we project ourselves to be in the world. Ahana must make hard choices in her ongoing battle to determine whom to place her trust in. 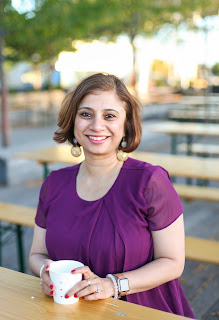 Sweta Srivastava Vikram is the author of the new novel Louisiana Catch. Her other books include Perfectly Untraditional and Mouth Full. Sweta is an award-winning writer of twelve books and a five-time Pushcart Prize nominee. Her work has appeared in a variety of publications, including The New York Times. She lives in New York City.
Here is an excerpt from the book to get you enticed.
The music blared. I hated dancing. My body didn’t know rhythm, and I kept losing my balance. But that night, I did the steps others were doing in the club. After a while, women turned their backs toward their dance partners on the dance floor. With the beats, first the women gyrated their hips and went low, closer to the floor. And then it was the men. That was my out. I started to leave, but Mike pulled me closer to himself. I shrugged. He leaned in close and touched my hair. I pushed him away, but he got progressively grosser. He moved closer, so close that I could feel the bulge in his pants. Dev, at a friend’s farmhouse in the outskirts of Delhi, had done the exact thing to me on the dance floor. He was drunk and literally dragged me to one of the bedrooms. I was on my stomach; he was on top of me being all aggressive. Suddenly, I realized he had passed out—with his man parts in my buttocks. Because he was drunk, he was a dead weight and I couldn’t get him off or out of me. I had to lie there, crying, waiting for him to go flaccid. Feeling Mike so close to me, I couldn’t stop the flashbacks. I tasted anger and vomit in my mouth. I tried to free myself from Mike and was about to elbow him in his stomach, when Rohan, in less than a minute, came to separate me from Mike.
“You again?” Mike moved his hands from my body.
“A boyfriend won’t let his angry girlfriend make a mistake, now will he, bro?”
“Dude, I had no idea!” Mike put his hands up in the air and walked away.
Even in my slightly intoxicated state, I remembered Naina’s words. “Southern men will always protect you. They won’t punch a guy for you, but they will use charm and intelligence to make sure you’re always safe.”
Music. Booze. People. Hungry bodies. Rohan and I stood on the dance floor, staring at each other.
“Are you all right?” Rohan looked concerned.
I didn’t say a word.
“Let’s go, Ahana.” Rohan held my right wrist.
“No, I’m not going anywhere.” I released my hand from Rohan’s grip.
“If you don’t leave, I’ll carry you out.” Rohan pulled me closer.
“You’re the reason I’m here.”
“What are you talking about?”
“You’re the one who said I couldn’t pick up a guy. I picked a guy and danced with him.” I was two inches away from Rohan’s face.
“Fine. I get it. You win.” Rohan shook his head.
“It’s not about winning, Rohan. I don’t like any of this stuff…a stranger touching me or nonsensical drinking. I wasn’t brought up like this. To binge date or sleep around or have a random man touch me.”
“Then why are you doing something that clearly makes you so uncomfortable?” He held me closer.
“Where do you get off asking me these questions when you insisted I couldn’t find a date? I’m tired of everyone thinking I’m stupid and incapable.”
“I was teasing you.” Rohan spoke loudly so I could hear him.
“Well, it wasn’t funny!” I shouted.
“I’m sorry.” Rohan spoke gently.
Tears started to roll down my eyes. I couldn’t control them.
Sweta Srivastava Vikram

vvolkman said…
Thanks for kindly encouraging us to have you post an excerpt of Lousiana Catch for your readers! On behalf of Sweta Srivastava Vikram and myself, we humbly appreciate the opportunity to work with you.