Noon in Paris, Eight in Chicago 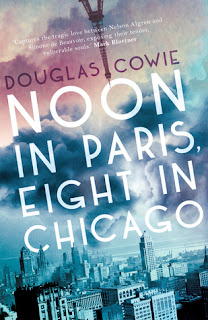 Chicago, 1947: on a freezing February night, France’s feminist icon Simone de Beauvoir calls up radical resident novelist Nelson Algren, asking him to show her around. After a whirlwind tour of dive bars, cabarets and the police lockup, the pair return to his apartment on Wabansia Avenue. Here, a passion is sparked that will last for the next two decades. Their relationship intensifies during intoxicating months spent together in Paris and Chicago. But in between are long, anguished periods apart filled with competing desires – lovers old and new, writing, politics, gambling – which ultimately expose the fragility of their unconventional ‘marriage’ and put their devotion to the test.

To be honest, I did not know that this book featured real life people. I have never heard of either Simone de Beauvoir or Nelson Algren. Yet, it does not matter as Mr. Cowie brought to life this story. Which, in turn made Simone and Nelson as real as if they were fictional characters brought to life.

All of the other people in Simone's life were intriguing as well. As I got to know everyone, I felt as if I was part of an special inner circle. Mr. Cowie writes with passion and an ease that just envelops the reader and invites them into the book. Now that I have discovered Mr. Cowie, I will be reading more of his books.