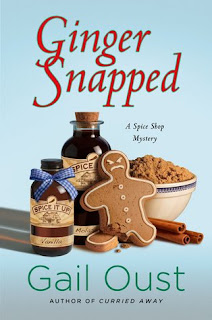 Piper Prescott and Police Chief Wyatt McBride might have gotten off on the wrong foot but, over the past year, their interactions have evolved into a friendship of sorts. And when the body of Shirley Randolph is found floating in a fishing hole, their relationship reaches entirely new territory.

Shirley, the town's Realtor of the Year, was also Wyatt's suspected romantic interest, and now the residents of Brandywine Creek are speculating that Wyatt is responsible for her death. As the town council moves to suspend the handsome lawman, Piper springs into action to save his reputation and possibly his freedom. She enlists the aid of her BFF, Reba Mae Johnson, along with Wyatt himself, to help solve the puzzle and find Shirley’s real killer.

Pointing them toward high-powered real estate tactics and possible affairs, the investigation soon becomes personal when Piper's shop, Spice It Up!, is burglarized, and she’s forced off the road late one night, narrowly escaping serious injury. Realizing that she must be close to uncovering the truth, and that the evidence against Wyatt is no longer circumstantial, Piper resorts to drastic measures to prevent a grave miscarriage of justice.

This is the fifth book in this series but it can be read as a stand alone novel. I liked the cozy mystery vibe I got from reading this book. Piper is definitely a star. Yet, her best friend, Reba Mae is special too. In fact, I would have liked more Reba Mae. She really brought the humor and kept things lively. Everyone needs a Reba Mae in their lives.

Although, I have not read any of the other books in this series, I connected with the rest of the characters as well. I like that they were not thrown into the story as secondary characters. They had roles in the story. While, I did not know much about Shirley, I did get that she rubbed some of the people the wrong way. However, I don't think she deserved her fate.

Watching Piper and Reba Mae try to solve the case did prove to be entertaining. They had luck on their side as they stumbled into trouble along the way as well. Plus, I have learned more about ginger and the different forms and ways it can be used. Ginger Snapped is sure to delight cozy mystery fans both long time fans and new ones as well.
Gail Oust