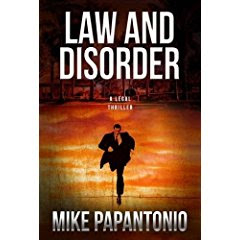 Law and Disorder: A Legal Thriller

In the tradition of John Grisham, from radio talk show host and "America's lawyer" Mike Papantonio, comes Law and Disorder, a highly suspenseful legal thriller in which a Florida attorney finds the system working against him.
Brash, brilliant, handsome Nicholas Deketomis has built a highly successful career as a lawyer protecting the rights of the innocent while winning multibillion dollar lawsuits from the powers that be. "Deke" may have come from the wrong side of the tracks but he's built a wonderful life for his close-knit family. His wife, Terry, and two children live in a beautiful house in a seaside community along the Florida Panhandle.
But their comfortable life is endangered. In the midst of a highly contentious multimillion dollar lawsuit against a powerful pharmaceutical company, as well as publicly advocating for a liberal Florida State Senate candidate, this time Deke may have riled the wrong powerbrokers. Scheming against him are a local Bible-thumping preacher, an ambitious district attorney, and two malicious brothers running one of the country's biggest oil corporations. A vile conspiracy is hatched to bring down Deketomis: Setting him up and attempting to convict him on a bogus murder charge would solve many of their problems.
Deke's in the trial of his life, which quickly becomes a media circus. But this good man will not go down without a bruising fight—especially when he finds his family threatened. And just as it seems that his enemies may have him cornered, he finds help from the unlikeliest source.
My Review
Yes, I could get glimpses of John Grisham in this book. However, I found while reading this book, I did not get so bogged down with lots of details and conversation. Deke is not only a hard fighting attorney but a family man. I appreciated this fact. It brought him into a different light with giving him a soul as well as being relatable and likable at the same time.
I was rooting for Deke the whole time. Not that it was hard to do with him taking on the big, bad pharmaceutical company. I briefly was aware that companies conducted their own studies but to hear it mentioned in this book was eye-opening. Consumers should be aware that the promotions that products have area really from the company looking for their best interest. Deke surrounds himself with good, smart people. A nonstop fast read. I look forward to reading more books by this author.

Mike Papantonio, author of four motivational books for lawyers and co-author of Air America: The Playbook, listed by The New York Times as a Political Best Seller, hosts the nationally syndicated radio show “Ring of Fire” with Robert F. Kennedy, Jr., and Sam Seder. He has interviewed Dan Rather, Helen Thomas, Howard Zinn, Arianna Huffington, Bernie Sanders, Bill Moyers, and many others. He is a Senior partner at Levin Papantonio, one of the largest plaintiff’s law firms in America, Papantonio is a political commentator who frequently appears on MSNBC, Free Speech TV, RT America Network, and Fox News. For more information, please visit Law and Disorder, and “Ring of Fire” on Facebook.
For more information visit his website at http://www.lawanddisorderbook.com, and connect with him on Facebook and Twitter.
Mike Papantonio