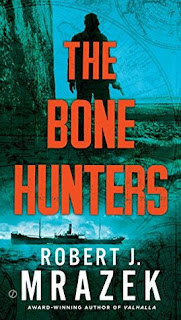 The award-winning author of Valhalla brings back archaeologist Lexy Vaughan and retired Air Force officer Steve Macaulay, as they race to save a priceless discovery from disappearing forever.…
One of the greatest archaeological finds of all time, Peking Man, the 780,000-year-old remains of our earliest known human ancestor, disappeared during World War II from a cargo ship bound for America.

Now the Chinese government is fighting to keep a new religion from taking hold—a faith based on the belief that Peking Man is God. And they dispatch ruthless operatives to find and destroy the world’s most priceless fossil.

But the U.S. government has its own team on the hunt. From the mountains of Bavaria to the jungles of Central America and across the vast Pacific, Professor Barnaby Finchem, his brilliant protégé, Lexy Vaughan, and pilot Steve Macaulay will brave the wrath of nature and of man to win a race against unbridled tyranny.… 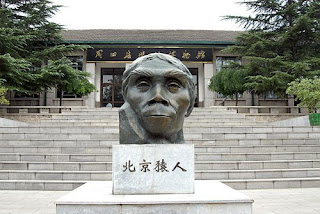 I have not read Mr. Mrazek's first book, Valhalla. Yet this book can be read as a stand alone novel. Having not read the first book I have not established a relationship with Lexy Vaughan and Steve Macaulay yet. However I thought that they worked well together. They have a good working relationship. This is nice because sometimes when I jump right into a series without having established a relationship, either I don't connect very well with the characters or it takes me a while to feel that connection. I had neither problem with this book.

What I did have a bit of an issue with is all of the ground work "dialect". It just seemed to go on and on and on. To quote one of the other characters in this book "This is all very interesting, but is there any way you could expedite your presentation". "I admire your diligence to detail, but there are other pressing matters on my agenda for today".

Yet, with all of the talking, I did like this book. The story was intriguing and it still read as a fast read. I do have a copy of Valhalla and I will read it.


Thank you to the Publisher as I have a bundle package of both THE BONE HUNTERS and it’s prequel, Vallhalla to giveaway. US only. Leave a comment with your email address. Winner picked Dec. 11th
Robert J. Mrazek

traveler said…
Thanks for this enthralling giveaway. saubleb(at)gmail(dot)com
December 5, 2015 at 4:13 PM

petite said…
This feature and novels are intriguing. Many thanks. elliotbencan(at)hotmail(dot)com
December 6, 2015 at 4:54 PM