Mr. Cutter will make readers afraid of going into the water again with The Deep, just like Jaws! 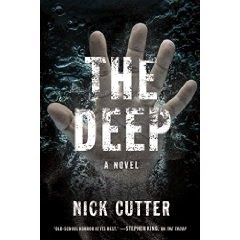 From the acclaimed author of The Troop—which Stephen King raved “scared the hell out of me and I couldn’t put it down.…old-school horror at its best”—comes this utterly terrifying novel where The Abyss meets The Shining.

A strange plague called the ’Gets is decimating humanity on a global scale. It causes people to forget—small things at first, like where they left their keys…then the not-so-small things like how to drive, or the letters of the alphabet. Then their bodies forget how to function involuntarily…and there is no cure. But now, far below the surface of the Pacific Ocean, deep in the Marianas Trench, an heretofore unknown substance hailed as “ambrosia” has been discovered—a universal healer, from initial reports. It may just be the key to a universal cure. In order to study this phenomenon, a special research lab, the Trieste, has been built eight miles under the sea’s surface. But now the station is incommunicado, and it’s up to a brave few to descend through the lightless fathoms in hopes of unraveling the mysteries lurking at those crushing depths…and perhaps to encounter an evil blacker than anything one could possibly imagine.


I picked this book up because it sounded good. I just did not realize just how spectacular it was going to turn out to me. Yes, I called this book spectacular. Mr. Cutter will make readers afraid of going into the water again with The Deep, just like Jaws! I could not stop reading this book. Every time that I tried to put it down, something else creepy or exciting would happen and I would have to keep reading. This is what happened to me last night. I literally could not go to sleep until I had finished reading the book. As I was reading this book I could not help but think of another current author that I really like and that is Jeremy Robinson. He has this great ability to tell a good story while sucking you into his weird, demented world. I mean this in a good way. The Deep will keep you keep you riding into the world of reality and sci-fi paranoia. Now that I have discovered Mr. Cutter I will be keeping my eyes on him and what he comes out with next.
Nick Cutter