Ghost Town is a good treat to give yourself this Halloween. 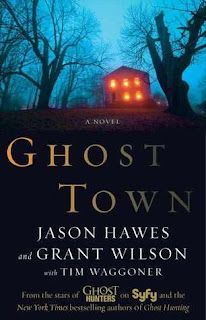 The TAPS gang…Amber, Drew and Trevor are visiting the town of Exeter. The town has the reputation of being a hot paranormal “it” town. The gang is attending a conference there. During the visit, the gang is brought on right away to investigate a case. A woman has been bludgeoned to death. As the gang investigates the case, they are met by an old friend or is he an enemy?


I am on the fence about this book. On one hand I liked the creep factor but on the other hand, I felt that the book was slow to get moving. There was a bunch of detail spent on the characters and explaining what everyone’s relationship was to each other.

Once the story got going about a third of the way into the book, then it did move fairly fast. The creep factor I was speaking of is what makes this book. Ok, it is not so much the scary but more the paranormal. The unexplainable that makes you go…WTF? There was a moment of that in this book. Then I got excited reading this book. Kind of like the stuff that the gang actually experiences on the television show. A plus that I did have about the details is that it helped me to imagine the Dark Lady and what the TAPS gang was facing. It was like I was a part of the team. Drew is the brains of the group. Ghost Town is a good treat to give yourself this Halloween.