Snuff Tag 9 should come with a warning….”This book is highly addictive”! 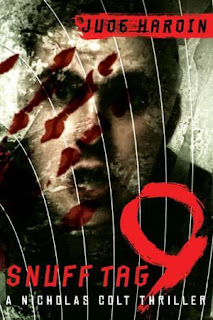 Nicholas “Nick” Colt is a private investigator. He has recently been contacted by Nathan Broadway. Nathan received a letter inviting him to participate in a real life video game version of Snuff Tag 9. The concept of the game is where 9 players are battling each other on a deserted island. The object of the game is to kill each other and be the last man standing.


Nick offers to check out the invitation for Nathan. The next thing Nick knows, he has just become the latest addition to Snuff Tag 9. Nick has no choice but to play the game when a surgical device is inserted into Nick that at any moment could kill him.

The concept of this book had me very intrigued. I picked it up to start reading and I had to make myself put it down. It was really that good. This book was not as gory as I was thinking it was going to be. It was more about the character and psychological aspect. This book did have the feel of the movie The Condemned combined with The Hunger Games.

I was cheering for Nick the whole time. He might have been considered the underdog but in this case, the good guy won. I thought about what I would do if I found myself in Nick’s situation and I would fight for my life. It is kill or be killed. To be honest the people that Nick did kill were annoying and needed to go anyways. The book ended on a high note. I now plan to go back and check out all of Mr. Hardin’s prior novels. Snuff Tag 9 should come with a warning….”This book is highly addictive”!