The Demoness of Waking Dreams 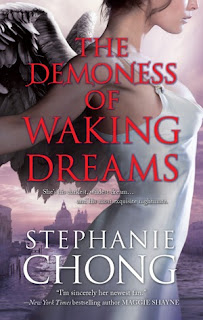 Luciana Rossetti is a demon. She made a deal with the devil that she would get to stay out of hell if she gave a human sacrifice every year. Luciana is also trouble. That is why ex-cop and new angel, Brandon Clarkson has vowed to stop Luciana. Once Brandon sees Luciana he is charmed by her beauty both in the day time and in his dreams.


The Demoness of Waking Dreams is the second of the Company of Angel books. This book can be read as a stand alone novel. I became a fan of Mrs. Chong's when I read her first book, Where Demons Fear to Tread. I have to say that I am enjoy reading this series. The first book drew me in and this book is seductive and leaves me wanting more.

The only reason that I rate this book a four is because I felt that most of the hotness took place during Brandon and Luciana's dream state and I wanted to see they together more. However, I did like that Brandon was the angel and Luciana the demon. Not to say that if the tables had been turned that I would not have minded Brandon being the bad guy. The way that he presented himself in this book as such a powerful force, it made me wonder if he could not be an archangel/demon. While the action did not come into play until the last half of the book, it made up for it by the chemisty with Brandon and Luciana. The action was mild at best. The ending leaves me hoping that Brandon will bump into Luciana again real soon.
Stephanie Chong