When We Believed in Mermaids 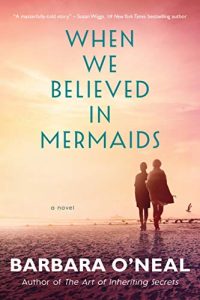 About When We Believed in Mermaids

Paperback: 352 pages
Publisher: Lake Union Publishing (July 16, 2019)
From the author of The Art of Inheriting Secrets comes an emotional new tale of two sisters, an ocean of lies, and a search for the truth.
Her sister has been dead for fifteen years when she sees her on the TV news…
Josie Bianci was killed years ago on a train during a terrorist attack. Gone forever. It’s what her sister, Kit, an ER doctor in Santa Cruz, has always believed. Yet all it takes is a few heart-wrenching seconds to upend Kit’s world. Live coverage of a club fire in Auckland has captured the image of a woman stumbling through the smoke and debris. Her resemblance to Josie is unbelievable. And unmistakable. With it comes a flood of emotions—grief, loss, and anger—that Kit finally has a chance to put to rest: by finding the sister who’s been living a lie.
After arriving in New Zealand, Kit begins her journey with the memories of the past: of days spent on the beach with Josie. Of a lost teenage boy who’d become part of their family. And of a trauma that has haunted Kit and Josie their entire lives.
Now, if two sisters are to reunite, it can only be by unearthing long-buried secrets and facing a devastating truth that has kept them apart far too long. To regain their relationship, they may have to lose everything.

My Review
I liked this book. It is about sisters, family, relationships, love, loss, secrets, and new beginnings. Barbara O'Neal pens a sweet and charming book that will warm readers hearts with engaging characters and a nice storyline in When We Believed in Mermaids.
Getting to know the two sisters, really helped to bring them to life for me. Also, it brought me closer to them both. I had no favorite as I could relate to both of them for different reasons. I did want to point out that I read some readers thought the sex was too much in the book. I did not think it was too much. It was not over the top but part of the story. In addition, the sex scenes were not ages long either. I actually have glad Javier came into the picture for Kit. It allowed her to free her inhibitions with Javier. Something she would not have done back home.
As much as I did like this book; I did feel like it moved at a slower pace. It too a while to get to the "meat" of the story with why Josie faked her own death. I will say that there were no winners when the secrets were revealed. There is only hope, family, and the bond of sisters.

Barbara O’Neal is the author of twelve novels of women’s fiction, including The Art of Inheriting Secrets, How to Bake a Perfect Life, and The All You Can Dream Buffet. Her award-winning books have been published in more than a dozen countries, including France, England, Poland, Australia, Turkey, Italy, Germany, and Brazil. She lives in the beautiful city of Colorado Springs with her beloved, a British endurance athlete who vows he’ll never lose his accent.

Sara Strand said…
Sometimes I'd like to fake my death but my luck I wouldn't make it out of my state! Thank you for being on this tour! Sara @ TLC Book Tours
August 1, 2019 at 12:46 PM