The Price of Safety 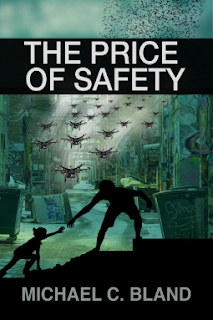 By 2047, no crime in the U.S. goes unsolved. No wrongdoing goes unseen. When Dray Quintero learns his 19-year-old daughter Raven committed a heinous act, he covers it up to save her life. This pits him against the police he’s respected since he was a child and places him in the crosshairs of Kieran, a ruthless federal Agent. To survive, Dray must overcome the surveillance system he helped build and the technology implanted in the brains and eyes of the citizens.Forced to turn to a domestic terrorist group to protect his family, Dray soon realizes the sheer level of control of his adversaries. Hunted and betrayed, with time running out, will Dray choose his family or the near-perfect society he helped create?

When it comes to techno thrillers, I thought this book fit the bill nicely. Instantly, I was transported to the year 2047. Everything that was described...the world and the people; I had a vivid image in my mind.

To be honest, I don't feel like the world that this story was built upon is not far off from what could be reality some day. The pacing of the story is fast without any speed bumps. Which is nice as it meant I did not get bogged down with too many details or too little.

I felt for Dray and the situation he found himself in when it came to his daughter, Raven. In fact, I even understood why he did what he did in the beginning of the story. This story also shows how technology can be both a good thing and bad one. Great for the technological improvements we have made but too much gives the government ways to track us. I would recommend this book to readers.
Michael C. Bland