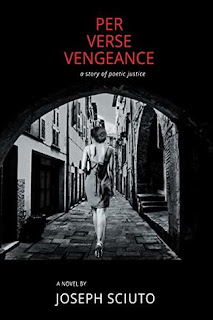 Hollywood. Las Vegas. Beverly Hills. A world of corrupt movie moguls, heartless kidnappers, and innocent girls sold into slavery by their own families.When wounded Kentucky-born beauty Nicole Tyler ditches her handlers in Las Vegas and sets out to avenge the death of her best friend, her bloody rampage threatens a powerful network of kidnappers and shady businessmen who will stop at nothing to protect their own interests. Bent on toppling their illegal enterprise and determined to save her sister from becoming its latest victim, Nicole has no time for a handsome movie producer and returning soldier, Nick Righetti, whose attentions threaten to distract her from her mission.A gripping tale about love, family, and the poetics of revenge, Per Verse Vengeance moves briskly between Las Vegas, Kentucky, Beverly Hills and Hollywood on the trail of a young woman who must decide between getting even and opening her heart.

This is the second novel I have read by Mr. Joseph Sciuto. Mr. Sciuto just gets stronger and stronger with each new book. This book has the vibes of a great femme fatale mixed with a dash of noir.

I really felt for Nicole and Nick. There was so much more to both of them. The more familiar I became with them, the more I just fell in love with them both. As the saying goes; the road is paved with many bumps and twists but it is made easier with company. Yes, Nicole and Nick do struck up a romance but it does not distract from the overall storyline. In fact, it works with the plot.

This may be a short novel but Mr. Sciuto does not miss anything...a good opening, middle and ending. The only thing you will be missing out on is a great read if you don't pick up a copy of this book. A must read.

Joseph Sciuto said…
Thank you, Cheryl. Once again, greatly appreciate you reading the book and writing the review.
February 16, 2019 at 10:46 AM

Unknown said…
I am reading this book for my college literature class and the only thing I can say is WOW, great book. Reminds of some of Stuart Wood's books that keeps you engaged and on the edge of your seat. Even though it is fiction, it drives from real life situations that make you think how dark the world has the potential to be. Great read and recommend!
March 28, 2020 at 12:35 PM