What a Difference a Duke Makes 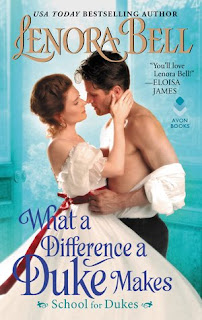 Edgar Rochester, Duke of Banksford, is one of the wealthiest, most powerful men in England, but when it comes to raising twins alone, he knows he needs help. The only problem is the children have chased away half the governesses in London. Until the clever, bold, and far-too-enticing Miss Mari Perkins arrives.

Lost: One heart to an arrogant duke

Mari knows how to wrap even the most rebellious children around her finger. But their demanding, wickedly handsome father? He won't be quite so easy to control. And there's something else she can't seem to command. Her heart. The foolish thing beats so wildly every time the duke is near.

Found: A forbidden passion neither can deny

As his employee, Mari is strictly off-limits. But what if she's the one breaking all his rules? In the game of governess versus duke, how can Edgar maintain his defenses when the only thing he wants to do is let the tempting beauty win?

It is books like this one that are bring me back to the regency genre. What a Difference a Duke Makes is pure enjoyment!

Mari is a surprise. A great one. In the beginning I thought she was timid but it quickly became apparent that there was more to Mari like a back bone. She fought her first battle with Edgar and then with the twins, Michel and Adele. Which, when I got to know the twins story and them very well; I just fell in love with their wild spirit. Another person who showed a wild spirit is Edgar's sister, India. I would love to see and read her story.

Edgar displayed no "airs" about him. He was warm and personable. In fact, it was through Mari and the twins that he opened up. Of course, there is romance as well. Yet, Mari and Edgar did not hook up until well into the story. Therefore, when they did, it was real. Again, as I stated previously, this is a fun read.
Lenora Bell