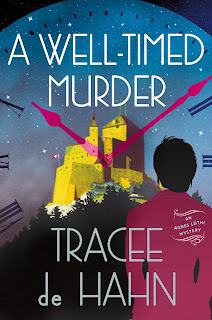 "A true page turner...I found the plot fascinating, and de Hahn builds the tension and suspense perfectly to a satisfying conclusion. I was left wanting to read more about Agnes, and I am looking forward to her next adventure "-- Charles Todd on Swiss Vendetta

Swiss-American police officer Agnes Lüthi is on leave in Lausanne, Switzerland, recovering from injuries she sustained in her last case, when an old colleague invites her to the world’s premier watch and jewelry trade show at the grand Messe Basel Exhibition Hall. Little does Agnes know, another friend of hers, Julien Vallotton, is at the same trade show—and he’s looking for Agnes. Julien Vallotton was friends with Guy Chavanon, a master of one of Switzerland’s oldest arts: watchmaking. Chavanon died a week ago, and his daughter doesn’t believe his death was accidental. Shortly before he died, Chavanon boasted that he’d discovered a new technique that would revolutionize the watchmaking industry, and she believes he may have been killed for it. Reluctantly, Agnes agrees to investigate his death. But the world of Swiss watchmaking is guarded and secretive, and before she realizes it, Agnes may be walking straight into the path of a killer.


Tracee de Hahn's mystery, A Well-Timed Murder, is another magnetic mystery that will engross readers from the opening page to the stunning conclusion.

I have eye balled the first book in this series but never read it. After reading this book, I will have to go back and check it out. This is a fun, cozy read. Plus, I found the cast of characters to be personable and entertaining. Although, the star was Agnes. She was lovely but intelligent as well. Additionally, I like that she did not get scared so easily.

The mystery of the case that Agnes was solving was intriguing. Who knew that the latest technology in the watch business was so deadly. While, some of the clues were obvious and I was not so easily fooled; it was still entertaining to read this book and see how Agnes would put all of the clues together to solve the mystery. Fans of cozy mysteries should check out this book.

Tracee de Hahn is author of the Agnes Lüthi mysteries, which were inspired by her years living in Switzerland. Prior to writing full time she practiced architecture and was head of university alumni relations at a major west coast university. Born in Cape Girardeau, Missouri, Tracee lived most of her life in Kentucky. She is a member of Mystery Writers of America, Sisters in Crime and International Thriller Writers. Currently she and her husband live in southwest Virginia with their Jack Russell Terriers.

This is a rafflecopter giveaway hosted by Partners in Crime Virtual Book Tours for Tracee de Hahn. There will be 1 winner of one (1) Amazon.com gift Card. The giveaway begins on March 1 and runs through April 1, 2018.