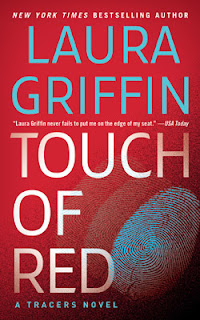 When crime scene investigator Brooke Porter arrives at the home of a murdered woman, the only thing more shocking than the carnage is the evidence that someone escaped the scene. But where is this witness now? A thorough search of the area yields more questions than answers, and before Brooke even packs up her evidence kit, she’s made it her goal to find the witness and get them out of harm’s way.

Homicide detective Sean Byrne has seen his share of bloody crime scenes, but this one is particularly disturbing, especially because Brooke Porter is smack in the middle of it. Sean has had his eye on the sexy CSI for months, and he’s determined to help her with her current case—even if it means putting his attraction on hold so he and Brooke can track down a murderer. But as the investigation—and their relationship—heats up, Sean realizes that keeping his work and his personal life separate is more complicated than he ever imagined; especially when the killer sets his sights on Brooke.

Another great read by author Laura Griffin. If you have not read any of these books in this series, you are missing out. I can't stop reading these books fast enough.

The relationship dynamics between Brooke and Sean was good. I don't often say this about relationships in my thriller books but in this case, I actually wanted more. I wanted Brooke and Sean to interact more as a couple. It was like they would take one step forward and two steps back. Yet, Sean is perfect for Brooke. He respects her space but at the same time would do anything to protect her. Brooke needed that as she put herself in dangerous situations with her push forward attitude. Although, I liked this about her as she didn't really show fear.

When it came to the storyline as a whole, I liked the vibe. The story moved at a great pace with plenty of intensity. Which picked up towards the end. Laura Griffin brings the intensity and packs a strong punch with Touch of Red!