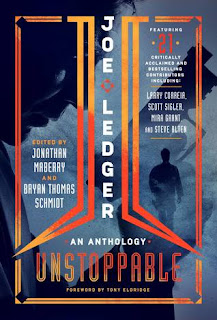 This is by far one of the best anthologies I have read in a long time. It is packed full of great short stories. There were a lot of authors I was being introduced to the first time. My list of authors and books to check out has now grown after finishing this anthology. Which goes to saying that I am not that familiar with the world of Joe Ledger. Yet, after getting to know him some being featured in so many stories, I want to familiarize myself better with Ledger.

I am excited to see two of my favorite authors featured in this anthology...Mr. Scott Sigler and Mr. Jeremy Robinson. Both great and amazing authors. If you have never read either of their work, you have to check them out. I was not disappointed in their stories in this anthology. Although, some of my other favorite stories were and not in order: Honey Pot by Steve Alten, Confusion by Nicholas Steven, Target Acquired by Christopher Golden and Tim Lebbon, White Flame on Sunday by James Ray Tuck, Rookie by Joe McKinney, and Crash Course by Dana Fredsti to name a few others.

Hunting monsters is hard work but it can be humorous as well. Fans of Joe Ledger will by thrilled by this anthology. Skip the candy bars and costumes and treat yourself to a copy of this anthology!