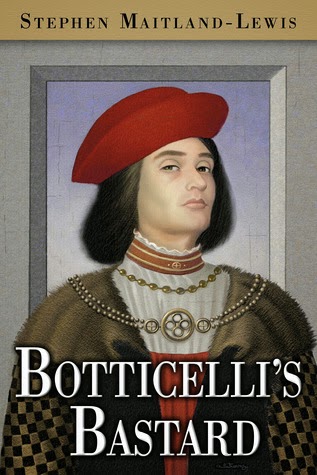 Art restorer Giovanni Fabrizzi is haunted by an unsigned renaissance portrait. Obsessed to learn the truth of its origin, he becomes increasingly convinced the painting could be the work of one of history’s greatest artists, which if true, would catapult its value to the stratosphere. But in learning of the painting’s past, he is faced with a dilemma. He believes the portrait was stolen during the greatest art heist in history—the Nazi plunder of European artwork. If true and a surviving relative of the painting’s rightful owner were still alive, Giovanni, in all good conscience, would have to give up the potential masterpiece. His obsession with the portrait puts a strain on his new marriage, and his son thinks his father has lost his mind for believing an unremarkable, unsigned painting could be worth anyone’s attention. Regardless, Giovanni persists in his quest of discovery and exposes far more truth than he ever wanted to know.

To be honest I briefly read the summary of this book and thought it sounded interesting. Then when it arrived and I re-read the back cover I had my doubts and was like "What did I commit myself into reading" So you could say I really had my mind made up. Well I am here to tell you that you really can not judge a book by it's cover. I fell right into the groove reading this book. It was only a matter of a few short hours and I was done with this book. The ease that the author wrote this book was great. Also, I liked that Giovanni was a normal guy who was kind of down and out on his life at the current moment. The talking portrait was a fun twist. The way that the portrait spoke of others who did not know art was very upper class but the author again was smart in the way that he presented the conversations that I was not turned off by the portrait. Then the mystery surrounding the portrait was intriguing and I like Gio had to learn the truth. The author actually made me interested in art reading this book. So if you are looking for something different to read and new you should check this book out.

Unquestionably, Giovanni Fabrizzi, the art restorer. He was burdened with sadness and later on was faced with the dilemma of Satan on one shoulder and the good angel on the other in determining his course of action. But there is a moral tale for all of us and I found myself inspired by his ultimate decision.

Sophie’s Choice by William Styron. This novel is superb on every level – character, plot, language, and overall style. I first read the book many years ago, at a time when I was not writing professionally, so I didn’t appreciate the subtlety and brilliance of Mr. Styron. Reading it again recently, I realized that the author was one of the major world’s literary geniuses. His writing is so fine that I have to resist the temptation of never writing another word.

I try to do so. Even if I am not writing a novel, I think it is important to write something on a daily basis, whether it be a journal entry, or a complex social or business letter. The great piano virtuoso Arturo Rubenstein remarked once that “the first day I do not practice, I notice. The second day I miss a practice, the critics notice. The third day – the audience notices.”

Treat the art of writing as a serious professional occupation, and not a recreational activity. Try not to read fiction whilst you are writing fiction, as you could fall into the trap of admiring a particular descriptive passage in something that you have read, and subconsciously repeating it in your own work. Read fiction before or after you have completed your book, not during your exercise.

I have a difficulty in remaining focused writing within a busy domestic environment. Constant phone calls, yapping dogs, noisy vacuum cleaners, and other distractions are serious impediments for me. But everyone is different. I write in an office close to my home, but if I had to work at home, I would probably need to have it soundproofed, no phone, and a do-not-disturb notice on the door.

I made three trips to Lagos, Nigeria during the 1990s, and was held captive and under virtual house arrest; had a machine gun thrust at me through an open car window, en route from the airport to my hotel; and had my passport seized until I was able to come up with the demanded ransom.

Stephen Maitland-Lewis is an award-winning author, a British attorney, and a former international investment banker. He held senior positions in the City of London, Kuwait, and on Wall Street before moving to California in 1991. He owned a luxury hotel and a world-renowned restaurant and was also the Director of Marketing of a Los Angeles daily newspaper. Maitland-Lewis is a jazz aficionado and a Board Trustee of the Louis Armstrong House Museum in New York. A member of PEN and the Author’s Guild, Maitland-Lewis is also on the Executive Committee of the International Mystery Writers Festival.

His novel Hero on Three Continents received numerous accolades, and Emeralds Never Fade won the 2012 Benjamin Franklin Award for Historical Fiction and the 2011 Written Arts Award for Best Fiction. His novel Ambition was a 2013 USA Best Book Awards and 2014 International Book Awards finalist and won first place for General Fiction in the 2013 Rebecca’s Reads Choice Awards. Maitland-Lewis and his wife, Joni Berry, divide their time between their homes in Beverly Hills and New Orleans.


I have 1 copy to giveaway. US. Leave a comment with email address. Winner chosen November 28th

petite said…
Thanks for this fascinating and lovely giveaway. elliotbencan(at)hotmail(dot)com
November 20, 2014 at 9:07 AM

traveler said…
Intriguing and captivating book. Many thanks. saubleb(at)gmail(dot)com
November 20, 2014 at 2:10 PM

KAS said…
Thank you for featuring this new release; now that I know about this book I'm eager to read it! Please include me in the giveaway drawing. Here is the info you requested:
shamy at post dot harvard dot edu