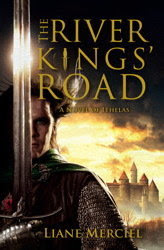 There is a feuding war going on between the kingdoms of Oakharn and Langmyr.

Brys Tarnell is a mercenary. He was part of Sir Galefrid of Bulls’ March entourage. An ambush was waiting for Sir Galefrid outside the church, they were praying in. Brys was not in the church. On his way out of town, Brys is handed a baby. The baby is Wistan, who is heir to the throne.

Odosse and her newborn son, Aubry are all alone. When Brys comes upon them promising safety, Odosse agrees to become nurse maid to Wistan.

Sir Kelland Knight of the Sun. Bitharn is Sir Kelland friend and companion. She is deadly with a bow and arrow. What Sir Kelland doesn’t know is that Bitharn loves him.

Leferic is the brother of Sir Galefrid’s. He already has dreams of power and glory now that his brother is dead. The only person who could crush Leferic’s dreams is Wistan. It is going to be a long journey on The River Kings’ Road.

The River Kings’ Road is author, Liane Merciel’s debut novel. This book is a mixture of Lord of the Rings for the adventure, The Sword and the Stone for the theme, and The Riyria Revelations series for the great story line and characters. I have to admit through I really enjoyed all of the characters; my favorite parts of this book were when Brys and Odosse were featured. From the first page to the last page, this book grabbed me. There was not a dull moment to be found in this book. All of the characters interacted well with each other. The River Kings’ Road is one book you will be recommending to your friends, over and over again.
Liane Merciel