December 02, 2008
I want to thank author Sandra Worth for making sure I received a copy of The King's Daughter to review. 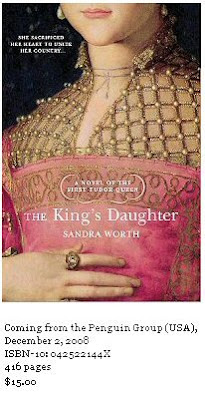 Seventeen year old Elizabeth of York loved and adored her father. She and him were very close. So she had no reason to doubt that her father's predecessor would be a just and trust worthy man, especially when that man is her uncle. Richard of Gloucester has barely become the new ruler of England and already hings are going very badly for Elizabeth and her family.

First Elizabeth learns that her father was a bigamist; which you can imagine made Elizabeth very irate as she thought her and her father had no secrets between them. With this new piece of information, the problem arises now that Elizabeth, her brothers and sisters are all illegitimate children and now no longer eligible to be considered for the throne. As if being declared a bastard isn't bad enough; Elizabeth's brother are taken into Richard's custody and supposedly killed.

How can Elizabeth ever respect a king who could be so cruel to his relatives? While assisting the Queen in her court, Elizabeth comes to understand and respect her uncle as king of England. Elizabeth matures was more beyond her years to turn into the lovely. beautiful mother to King Henry the eighth.

The King's Daughter by Sandra Worth is the first book I have read by this author. I have to tell you that I was very impressed. I found this book to be very true and accurate to what actually transpired back in that time. The King's Daughter is like reading a history lesson but much more exciting as well as enjoyable. Sandra Worth's writing is so realistic that I felt like I was Elizabeth. As far as historical novels go, The King's Daughter has got to be one of the best I have read in a while. I will be recommending Ms. Worth to all my friends. I plan on check out all the rest of Ms. Worth's books in the Rose of York trilogy.

Check out all of Ms. Worth's books at www.sandraworth.com
Sandra Worth

Sarita Leone said…
This sounds very interesting. I enjoy historical novels, so I'm going to check this one out. Thanks for the great review!
December 3, 2008 at 4:45 AM