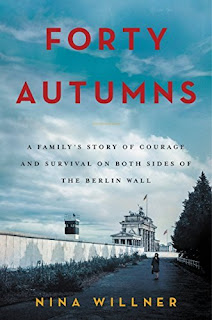 In this illuminating and deeply moving memoir, a former American military intelligence officer goes beyond traditional Cold War espionage tales to tell the true story of her family—of five women separated by the Iron Curtain for more than forty years, and their miraculous reunion after the fall of the Berlin Wall.

Forty Autumns makes visceral the pain and longing of one family forced to live apart in a world divided by two. At twenty, Hanna escaped from East to West Germany. But the price of freedom—leaving behind her parents, eight siblings, and family home—was heartbreaking. Uprooted, Hanna eventually moved to America, where she settled down with her husband and had children of her own.

In Forty Autumns, Nina recounts her family’s story—five ordinary lives buffeted by circumstances beyond their control. She takes us deep into the tumultuous and terrifying world of East Germany under Communist rule, revealing both the cruel reality her relatives endured and her own experiences as an intelligence officer, running secret operations behind the Berlin Wall that put her life at risk.

A personal look at a tenuous era that divided a city and a nation, and continues to haunt us, Forty Autumns is an intimate and beautifully written story of courage, resilience, and love—of five women whose spirits could not be broken, and who fought to preserve what matters most: family.

I have been eyeing this book for about a month. I have wanted to check it out. I finally got the chance to. This book is way better then I imagined it to be. Sometimes I go into a nonfiction or memoir looking for the history and connection with the people. I experienced this while reading this book. Instantly, I felt that connection with Oma, Opa, Hanna, and Heidi to name a few.

Unless you really lived divided behind the "Iron Curtain" aka Great Wall; you have no idea what freedom, loss of family, and fear is all about. While I was lucky enough to have been adopted by my parents in the US, I might have gotten to understand a little more what it would have been like had I not been adopted. I was born in South Korea. I was so intertwined with everyone that when the Wall came down, I almost cried when Heidi and her husband traveled into West Germany and really felt true freedom. This book reminds us of the past. Yet, it also teaches us to be grateful for what we have and the important things in life. A treasure of a read!
Nina Willner