Cheryl puts the "Wild" back into the Wild West! 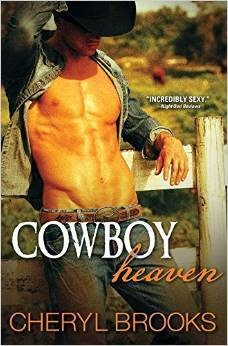 When you find yourself in cowboy heaven...
When lonely widow Angela McClure hires a gorgeous hitchhiking cowboy with an affair in mind, she knows they'll have to be discreet: her old-fashioned father and the stern ranch foreman adamantly discourage any interaction between her and the ranch hands.
Things can get hot as hell...
Despite their attempts at secrecy, the heat between them is undeniable. To divert suspicion, Angela forms a new plan: she'll flirt with all of the ranch hands. Suddenly Angela has a whole stable full of sexy-as-sin cowboys to play with, but only one can win her heart.

Angela is driving home when she sees a sexy, tired, cowboy walking along the side of the road. She picks him up. His name is Troy. Angela offers Troy a temporary job as a ranch hand until one of her current ranch hands, Dusty is back on two feet. Angela can't resist a nice set of "buns". Troy has a nice set. Angela can't keep her hands off of them. Yet, Dusty wants in on the action as well. Angela is about to have herself some fun.

I love that Angela was the older woman in the story. She showed that age is just a number. I think she even taught Troy and Dustin a few things. Experience is the answer. I probably would have chosen both guys as well. I look forward to following this new series by this author.
Cheryl Brooks