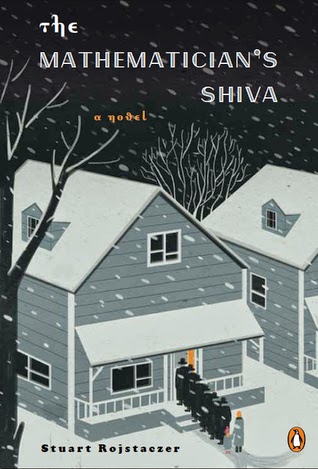 A comic, bittersweet tale of family evocative of The Yiddish Policemen’s Union and Everything Is Illuminated

Alexander "Sasha" Karnokovitch and his family would like to mourn the passing of his mother, Rachela, with modesty and dignity. But Rachela, a famous Polish émigré mathematician and professor at the University of Wisconsin, is rumored to have solved the million-dollar, Navier-Stokes Millennium Prize problem. Rumor also has it that she spitefully took the solution to her grave. To Sasha’s chagrin, a ragtag group of socially challenged mathematicians arrives in Madison and crashes the shiva, vowing to do whatever it takes to find the solution—even if it means prying up the floorboards for Rachela’s notes.

Written by a Ph.D. geophysicist, this hilarious and multi-layered debut novel brims with colorful characters and brilliantly captures humanity’s drive not just to survive, but to solve the impossible.

This is not my typical style of reading but every once in a while I do like to branch out and try no books and I love checking out new authors.

So glad that I did take a chance on this book. It is a gem. Like finding a friend. Instantly I formed a bond with Sasha, his mother, and the other mathematicians. Each of the mathematicians were different in their own way but this uniqueness brought dimension to the story as a whole. As the story progressed I felt like a close member of the circle of friends with Sasha and his mother. As more details emerged about her, I was more and more impressed. The author brought life to the characters, Also I was impressed that with the author's background of being a professor of geophysics that he was able to bring the story into an understandable level for me the reader without using big words or trying to show his intelligence. A great showing for Mr. Rojstaczer's debut novel.
Stuart Rojstaczer

Mystica said…
This sounds a very interesting read. I think I saw this on Netgalley so I am going to check it out.
January 6, 2015 at 10:38 PM