What a joy it was to get to review these two novels! My only hope is that this isn’t the end of Bea and Ben, the proprietors of the said B &B. Although the Bard’s isn’t your usual B&B – nope, it’s main purpose is to create R&R for the CIA friends of Ben who are in dire needs of it usually. When things get boring (and they rarely do!) Uncle Edward and Lorna can getting a card game going or find a body someplace. 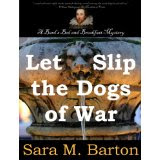 In Let Slip the Dogs of War, Bea, former bookshop proprietess and newly rescued bride, finds out that there are things to be found under the bed besides dust. A naked body, in fact. No one they know, fortunately; but Ben has his suspicions. Bea finds out things about Ben’s Uncle Edward she hadn’t known and Lorna isn’t the librarian Bea thought she was. Well, she was but she wasn’t. A young girl is affected by the war in Syria and Ben travels to the rescue. She is frightened and alone until she meets Bea and crew and immediately becomes the special person she is meant to be. 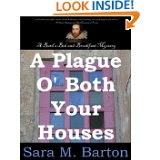 A Plague o’ Both Your Houses brings us the consummate witch with a capital B as a houseguest. Linda Romano hated everyone equally and did a good job of it. Supposedly dying and tended to by her nephew the Dr., Linda made everyone’s life miserable. No one more than her caregiver Manie, the Jamacian woman hired to take care of her. Linda had things on Manie and wasn’t above using them to gain cooperation; until they backfired. No one likes a witch. The wordplay between Bea and Ben is worth the price of the book in itself but the plots are good but Ben’s colleagues are all interesting and humorous and the presence of Uncle Edward does nothing but add to the plan. Go download these immediately. You’ll love them!
Sara Barton