Chanel Bonfire is a book that will have you glad you grew up with the family you have. 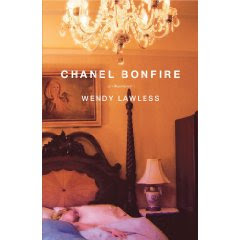 To be perfectly honest, I first had no clue who Wendy Lawless or her mother were and second I picked up this book to help me before I went to bed. I wanted a book to read that I did not have to put much thought or focus into before I went to bed. Well this was the wrong book for that. Instantly as soon as I stated reading this book, I was intrigued and fascinated by Wendy and her sister, Robin’s childhood and growing up with their mother. Wow, after reading this book I felt sad for Wendy and her sister, Robin with all that they had to endure with their mother. Of course I did not blame Wendy and Robin for rebelling out towards their mother. Or I should say Robin who was the real rebel. Wendy was just trying to be the best daughter she could. Which I think that she did a really good job. She is a fighter. I also was happy that Wendy was able to reconnect with her father. The little bit that I got to see and know of him as featured in this book; he seemed like a nice guy. What I appreciated the most about this book was how candid Wendy was about her childhood. I felt like I got a real good look into her life and who she was as a child and who she has become as an adult. Chanel Bonfire is a book that will have you glad you grew up with the family you have. So pick up a copy of this book and see for yourself. Excerpt Chanel Bonfire by Wendy Lawless: Chapter One THE BIG SLEEP Perhaps because her second marriage had only lasted twenty months, or perhaps because she was having a bad hair day, in January of 1969 my mother swallowed a whole bottle of pills and called my stepfather at his hotel to say good-bye. Although they were still legally married, he had installed himself at the Carlyle while she sued him for divorce. After he received her farewell call, he quickly finished his Gibson, telephoned the fire department, grabbed his Burberry rain- coat, and jumped into a taxi. It was a time in New York when you could say to a cabdriver, " Take me to the St. Regis," or, " Take me to the Oak Bar," and he would just take you there—no further explanation was needed. " Take me to the Dakota," he said to the driver. While my mother arranged herself on her mono- grammed, baby-blue satin sheets and prepared to enter the Valley of the Dolls, and my stepfather chain-smoked and shouted at the cabdriver to go faster, goddammit, I slept in the top bunk of the bed I shared with my younger sister, Robin, dreaming of hot dogs. We had been living in the Dakota, the late nineteenth- century, neo-Gothic apartment house at the corner of Seventy-second Street and Central Park West, for about a year and a half. And while I would later think of the place— the setting for the film Rosemary's Baby and the future and final home of John Lennon—as a glamorous backdrop for my mother's tumultuous second marriage and divorce, at the time it was just our rather large and wonderfully spooky apartment, in which I was about to find myself awakened by my mother's rescuers. I was driven from my hot dog dreamworld by a plink- ing sound, high and silvery—the sound of something falling, like rain but heavier and coming from inside the house. I got out of bed, carefully climbed down the bunk-bed ladder past my sleeping sister, and walked out into the long hallway of our cavernous apartment. I peeked around the corner to find four firemen in big, dark coats and hats beating down Mother's bedroom door with axes. One of them stood on a ladder breaking the glass in the transom window above the door. The shards of glass rained down on the men below and bounced off their helmets, making a tinkly noise as they hit the polished parquet floor. I wondered why they didn't use a key or just knock on the door like I did. They were making a big mess, which always made Mother angry. And it was very loud and Mother hated loud noises. (" It's because I'm a Libra," she'd explain.)
Wendy Lawless