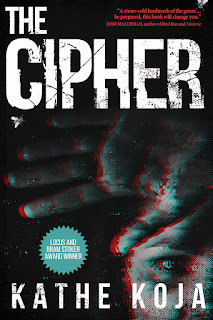 THE CIPHER by Kathe Koja

Winner of the Bram Stoker Award and Locus Awards, finalist for the Philip K. Dick Award, and named one of io9.com's "Top 10 Debut Science Fiction Novels That Took the World By Storm." With a new afterword by Maryse Meijer, author of Heartbreaker and Rag.

"Black. Pure black and the sense of pulsation, especially when you look at it too closely, the sense of something not living but alive." When a strange hole materializes in a storage room, would-be poet Nicholas and his feral lover Nakota allow their curiosity to lead them into the depths of terror. "Wouldn't it be wild to go down there?" says Nakota. Nicholas says, "We're not." But no one is in control, and their experiments lead to obsession, violence, and a very final transformation for everyone who gets too close to the Funhole. 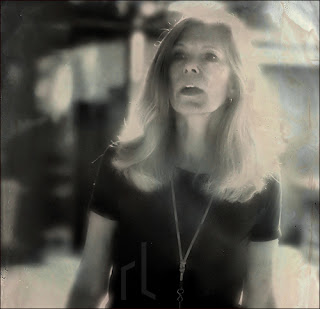 Kathe Koja writes novels and short fiction, and creates and produces immersive fiction performances, both solo and with a rotating ensemble of artists. Her work crosses and combines genres, and her books have won awards, been multiply translated, and optioned for film and performance. She is based in Detroit and thinks globally. She can be found at kathekoja.com.

“Hey Nicholas.” Over the phone she sounded colder than normal, but for her that was normal, just her phone voice, she would have made a great Inquisitor. “I’m coming over tonight.”

“Yeah?” She wasn’t coming to savor my presence, which gave me the right to fuck with her, a little and in a joshing way. “I was planning on going out tonight. Maybe tomorrow.”

“I’ll be there after work.”

She was, too, still in her barmaid outfit, which looked better than her regular clothes; at least everything was the same color, a decent black. She had something in a medium-sized paper bag; she held it like it was heavy. Seeing it made me nervous, I didn’t know why, but with Nakota you never knew anyway, you never got any warning. “What’s that?” I said.

“You’ll see. Ready?” She was. In fact almost jittery, which made me more nervous still. But I’m stupid. I go along with stuff.

Careful and quiet as always; still it was a wonder no one ever saw us, or that we never saw anyone. Maybe everybody in the building was in on our little secret. It wasn’t the kind of thing you’d talk about, none of us ever talked to each other anyway, I couldn’t identify half of my neighbors by sight. I only knew the ones who were close by or obnoxious. Just like life itself.

When we got into the room Nakota did a weird thing: she looked for a lock, swore when there was none. Carefully she set the bag down. “What’re you going to do?” I said, standing a little farther back than usual. “Tie me up and throw me in?”

She looked almost sorry she hadn’t thought of that herself. “Good thinking, but no. It is an experiment, though,” and she reached for the bag, pulled it down and away. “Something we haven’t tried before.”

All kinds of bugs: flies and roaches and beetles and mosquitoes, even a couple of dragonflies. It was beautiful, kind of, and kind of nauseating too. “Why aren’t they eating each other?” I asked, and realized I was whispering.

Nakota whispered too. “I sprayed some shit in there,” and, declining to elaborate, pushed the jar, nearer and nearer the Funhole, till it sat at the lip itself, far closer than we had ever dared to go.

“Now we wait awhile.” Her voice was shaking, she was so excited. “See what happens.”

We waited quite a while, there in the dark, my back against the unlocked door, Nakota for once at my side. Her scent was higher, her breath never slowed; she tried to smoke but I told her no, not in that airless firetrap, firm whisper, as firm as I ever got with her anyway, and she gave in. The insects jumbled, up and down, fighting the barrier they couldn’t see, then, “Look,” her sharp whisper but I was looking already, staring, watching as the bugs, one by one, began to drop, dying, to the floor of the jar, to whir in minute contortions, to, oh Jesus, to change: an extra pair of wings, a spare head, two spare heads, colors beyond the real, Nakota was breathing like a steam engine, I heard that hoarseness in my ear, smelled her hot stale-cigarette breath, saw a roach grow legs like a spider’s, saw a dragonfly split down the middle and turn into something else that was no kind of insect at all.

Finally they were all dead, stayed dead for a long time, or maybe it only felt long. I got courage enough to reach for the jar but Nakota cut me off: what instinct told her that?

And they boiled up, glass-bound airborne convulsion of wings and legs and shiny bodies and dead colors, mashed together like food in a blender, round and round so fast that the jar rocked on the floor, tiny polka till it finally spun still and stayed. My mouth was open. It took effort to shut it.

I did not want to touch that jar.

It was hot, I snatched my hand away, more cautiously used the front of my T-shirt to twist off the lid. “Aw shit,” and just looking made me miserable, I had to turn my head away. Nakota took the jar carefully into her lap and, to my disgust, began picking through its contents.

“No.” I sat back down, head canted back against the door, eyes closed as she went through her nauseating autopsy, listening to her small murmurs of surprise. Finally I heard the lid screw on, felt her hand on my shoulder.

It really wasn’t that bad, if you had a strong stomach. She had handpicked the best pieces, the strangest I should say: tiniest heads on double-jointed necks, a little splay of wings, four to the bunch, the half-intact body of the cockroach with the long spiderlegs. Her trophies, plucked from the underworld, displayed on a dusty floor. She was smiling, she touched my arm.

“No,” I said, and they weren’t, not to me. I had no desire to touch them but I did: to please her, yeah. Stupid reason, I know. Chances are she couldn’t have cared less. Balancing the least objectionable, the four-leaf-clover wings, admiring despite myself their crazed patterning, so delicate, etched and slanted glyphs in a language I could never hope to master. All at once I had a horrifying urge to eat those wings, stick them in my mouth, crunch their altered sweetness and I thrust them away, literally, pushed my arms out at Nakota; the wings fell gently to the floor.

“Take it easy,” angrily, rescuing them in one cradling hand. After a moment she said, “I need a bag or something.”

All the way upstairs I fought the image, mutant bodies whirling in blind hurricane, carne back with an empty plastic bread bag that said “Nature’s Wheat.” She filled it with her prizes, all the care of a researcher with difficult data, knotted the bag with meticulous ease.

“So.” I wouldn’t look at it, nodding to indicate the horrible mess in the jar. “What’re you going to do with that?”

She shrugged. “Throw it away, I guess.”