Lifting the Wheel of Karma 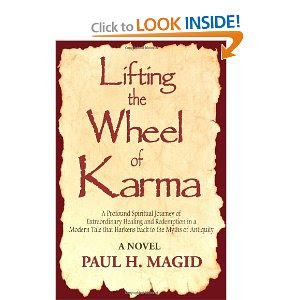 Joseph needed to heal himself. It may not have been possible at the time to heal his physical injuries but mentally and physically he needed to get with it or he would pass on. Joseph was a troubled child that grew into a troubled young man, with nightmares that would keep him from falling into a deep sleep.

Warriors trying to kill him, horses, and people all putting Joseph’s life in peril. Joseph works out daily. He was strong and healthy…physically. He was a feared Karate champion and was at the top of his game until his last tournament where he lost miserably. As if the embarrassment of losing wasn’t enough, he was involved in a horrible truck crash on the way home.

In a coma, Joseph tries to fight through the haze until he succeeds; Joseph awakes but ends up leaving in a wheelchair that will be his life’s companion. He remembers a man he spoke with in the locker room before and after his match. His name is Lahiri. Somehow, Joseph feels a need to search for this man. So Joseph and his older brother set off to do just that.

Lahiri lives in the Himalayas of India and the trek just to find him is a test of will. How he impacts Joseph’s life (and vice-versa) is a tale of thought, need, and, yes, Karma that the two are together now.

Paul H Magid was paralyzed from the neck down in a spinal accident and eventually made a full recovery, although he had to deal with several other issues along the way. It is his fate to pass this beautiful story on to us and it is our fate to receive it with open arms.

Purchase a copy of the book here
Paul H. Magid

Tribute Books said…
Cheryl, thanks for posting Nancy's lovely review of Paul's book. I know he will certainly appreciate the sentiment that it was, in fact, his mission in life to write this novel.
January 16, 2012 at 9:15 AM