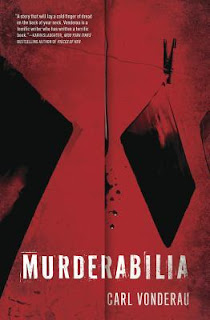 The son of a serial killer must reconcile with his own dark past and stop a new string of murdersWilliam MacNary was eight years old when his father went to prison. Since then, he's carefully built a life as a family man and a private banker for the wealthy. He tries to forget that his father dismembered and photographed thirteen women. And he tries to forget those exquisitely composed photos of severed hands, heads, and feet that launched the "murderabilia" art market.William has not spoken to his father for thirty-one years. No one at his tony bank knows whose son he is. Not until his wife's colleague is murdered and carved up in the same way his father would have done it.All the evidence points to William. And only one person can understand the copycat killer--the monster William hasn't seen since he was a child.

I liked this book. For the subject matter that the concept of this story is focused on; there is not a lot of gore featured in it. This is great for those readers who like a good murder mystery story but not all the gore. Although, I would classify this book in between a cozy mystery and a gorier murder mystery.

William is relatable. I could imagine someone who grew up with a father like he did would want to bury the past way down deep. He has lived a "normal" life for quite some time as a banker. He has a wife and child. However, when William receives a phone call and a photo that appears to be a new set of "murderabilia"; William will have to face his past if he wants a future.

The pacing of the story is a bit slow. Which was fine but I did crave the intensity levels to be cranked up several notches. Yet, the last third of the story did help make up some for this. It is where the story all came together with a twist. One that I didn't see coming. Well done Mr. Vonderau. I do look forward to checking out more books by this author.