Conversations and Cosmopolitans: Awkward Moments, Mixed Drinks, and How a Mother and Son Finally Shared Who They Really Are. 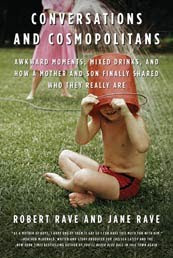 OMG. This book had me laughing so much. I can not remember the last time that I had such a fun time reading a book. I love Mrs. Rave. She is a sweetheart and knows all the right things to say. Of course, Mr. Rave is priceless. Like when Robert was going to get waxed and his dad gave an analogy about how he did not see a problem if his son wanted to get some things waxed as when he and Mrs. Rave first moved into their home, the back yard was over grown and they did not want anyone to come over until they had cleaned it up. Thus this classic line from Mr. Rave “I’m saying Robert needs to trim his tree and bush before anyone spends time in his backyard.”

Another favorite chapter of mine was when Robert was teaching his mom about the “gay glossary”. As you can imagine words can carry different meanings in the “gay glossary”. I have to say that one that really stuck with me and had me almost in tears from laughter was “Flagger”

There are many more great moments like the Cosmopolitan incident…Cosmopolitan 3 versus Mrs. Rave 0. Though as much as I am a fan of Robert’s. I have read both Waxed and Spin, which are both great by the way. I have to admit that Mrs. Rave kind of stole the spotlight. Reading her point of view after each chapter was classic. If anything, reading this book mad me love Robert even more and his family. If you want to read a really good book about love, family bond, and a mother and son relationship of growth and discovering one’s self than you have to run not walk or click purchase with your mouse and get a copy of Conversations and Cosmopolitans: Awkward Moments, Mixed Drinks, and How a Mother and Son Finally Shared Who They Really Are.
Jane Rave Robert Rave