Cemetery Girl will give you chills. 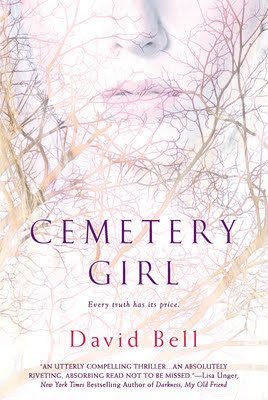 When Caitlin was just twelve years old, she disappeared. Since that time, Tom and Abby Stuart have tried to hold on to hope that Caitlin might still return to them one day. Though, with Caitlin gone, their marriage has fallen apart. Abby is finally ready to let go of Caitlin but Tom is not.

Tom and Abby receive “the call”. The one that they never thought that they would ever receive. The police ask Tom and Abby to come down as they have Caitlin. Tom and Abby are happy but Caitlin has changed. She is withdrawn and acting like a teenager. Tom and Abby can not figure out why Caitlin does not want to identify her kidnapper. What is Caitlin hiding?

I had been seeing this book popping up on different sites that I was visiting and the more and more that I kept reading about it, I thought ok, this is a book I have to check out sooner rather than later. I have to say that I am glad that I did. It was not so much the characters that did it for me but the story. The only person I really felt for was Tom. Everyone else had their doubts and had given up but not Tom. He fought until the bitter end. Tom made me feel and cheer for him. I wanted him to prove every one wrong. Otherwise, I found Abby and even Caitlin off putting. Abby was not supportive and would verbally lash out at time at Tom. Caitlin, who I understand can change after an ordeal that she experienced but to use the foul language she did, I did not care for. I wanted to wash her mouth out with soap. When I talk about the story, it is the way that Mr. Bell hinted at what happened to Caitlin and the changes. There was one point where I actually thought that maybe Caitlin had died and this was her ghost. Cemetery Girl will give you chills.
David Bell