The Mighty Queens of Freeville 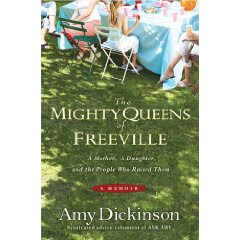 The Mighty Queens of Freeville: A Mother, A Daughter, and the People Who Raised Them is The Chicago Tribune; advice columnist, Amy Dickinson’s memoir. Amy shares with readers and fans an in-depth and personal look into her live. Nothing is keep back from her divorce to her ex-husband, being a single mother, friends, family and her job. Mainly though this memoir is really about Amy, her daughter, Emily and how they raised and took care of each other.

Amy takes us back to her hometown of Freeville, population 458, located in northern, rural, upstate New York. Emily, who is eighteen; one day up and declared her mother, herself, her grandmother and the rest of the women as The Mighty Queens of Freeville for the simple fact that they were all strong, independent women who could take care of themselves.

I found Ms. Dickenson’s memoir to be fun, intriguing and full of laughs and smiles. I always find it interesting to learn where someone came from and what their life was like growing up. Amy and Emily did a great job raising each other. The Mighty Queens of Freeville: A Mother, A Daughter, and the People Who Raised Them is the type of memoir that every memoir should be like. Everyone who reads this book is going to enjoy it.
Amy Dickinson