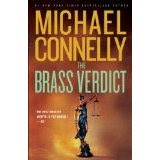 After been on sabbatical for about two years, prominent defense attorney, Mickey Haller finds himself in business again. A former colleague of his, Jerry Vincent has been murdered. Now Haller may have just inherited, what could be considered the biggest case of his career. He client is famous Hollywood movie producer, Walter Elliot. Walter has been accused of killing his wife and her lover. Also, Haller is helping to solve the murder of his friend Walter. Someone doesn’t like Mickey sticking his nose in places where it doesn’t belong. For all of Haller’s troubles, he now has Vincent’s killer after him.

Police detective, Harry Bosch is on the case to solve the murder of Walter Vincent. IT seems Vincent was dealing something shady on the side. Bosch and Haller don’t really like each other but they do respect one another. Mickey is adamant about not backing down, even if it means partnering up with Bosch.

You could call me a late bloomer of author, Michael Connelly. I have seen his books everywhere but just never read one till Truck Music. After reading Truck Music, I just fell in love with this author and his writing style. He had me hooked. The Brass Verdict is only the second book I have read by Mr. Connelly. I plan to go back and check out all the rest of his novels. One of the reasons, I like reading this author’s books is because of the main character, Harry Bosch. Harry is this brass, loud mouth, in your face, gives it as good as he can dish it kind of guy. Not many people can write a character like this, who is annoying. Another reason I enjoyed this book is because it reminded me of The Runaway Jury meets Law and Order. I look forward to more great reads by Mr. Connelly.
Michael Connelly

Literary Feline said…
I haven't read too much by Michael Connelly, but I toot his horn a lot because I've loved just about everything I have read by him. I am looking forward to reading this one early next year. Thanks for the great review!
December 28, 2008 at 7:49 PM