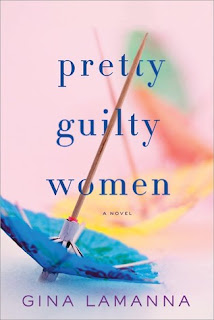 
Why would four women admit to committing the same murder?
Four different women offer four very different confessions to the death of a man found in the midst of a rehearsal dinner at an luxurious resort, each insisting they acted alone. Their stories are contradicting and confusing, posing a conundrum for the detective who must untangle their secrets.
Truth and friendship surface in surprising ways, but who is the guiltiest of them all and what really happened on that rooftop?
Pretty Guilty Women is suspense fiction at its best, in the vein of Big Little Lies and Force of Nature.


I was drawn to this book by the premise. I was looking forward to jumping into this book. In the beginning; I was into the moment. I was very curious as to why four women would so easily admit to murdering someone. This theme went on throughout the book.

It was the interviews that I found the most intriguing. After a while, I found my interest wavering. It was becoming harder to stick with this book but for a few chapters at a time. None of the women were that appealing to me. Therefore, I did not really care the motive or which woman was guilty.

You could say that I did find myself skimming parts of this book. This was only after I got to about fifty percent into the story and found it still going at a slow pace. The ending was fine. There were not enough intense moments for me.

Biology, the study of life, can be fascinating and wondrous. However, certain biology topics can sometimes seem incomprehensible. The best way to get a clear understanding of difficult biology concepts is to study them at home, as well as at school. Students should use quality biology homework help resources when studying. Below are some good resources and information to help you answer some of your obilogy homework questions.