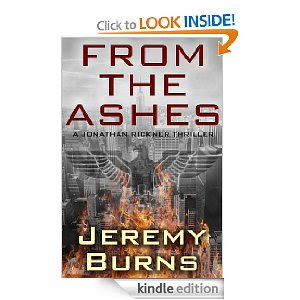 Review by Nancy
There are always hidden secrets – everywhere you look. The Federal Government probably has more than most and one of them is the subject of this well-written book. A man is murdered and his brother isn’t believing the suicide decision made by the local cops. Jon heard about Michael’s death while climbing in Australia. Michael had just proposed to the love of his life, why would he end it?

Jon and Michael’s fiancé, Mara, both agree on one thing: whatever Michael was researching got him killed and when someone tries to take Jon out for being in his brother’s apartment they are positive. And they’re right. Michael had discovered something some very powerful people are willing to do anything to acquire. A piece of paper signed by the Federal Government and given to…..well, that would be telling, wouldn’t it?

Amazing historical research, very frightening agent-types and some people just trying to do the right thing and led into it quite nice by author Burns. Even if you don’t believe in secrets, this is a story of the first-order and if you like mysteries pick it up. You won’t be sorry.
Jeremy Burns