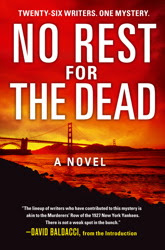 Ten years ago, Rosemary Thomas is found guilty of murdering her husband, Thomas. It was said that Thomas’s body was found encased within an iron maiden trap. His body was decayed and so decomposed that it was almost impossible to identify his body. The only thing that the police were able to use was a small, piece of a tooth.

Jon Nunn was the lead detective on the case. Present day. To this day the image of Rosemary’s execution still haunts Jon. Jon decides to reinvestigate the case for closure. What Jon finds instead is a web of lies and deceit.

What do you get when you mix some of the best (twenty-six mystery writers to be exact) and ask them to collaborate on one mystery novel? You just get one of the best books of 2011! The book is…No Rest for the Dead.

Ah, as if you could not already guess but I really, loved this book. I started this book on my lunch hour and by the time my hour was up, it was hard to go back to work and concentrate. I finished this book later that afternoon. There were no mis-steps in this book. It flowed and read like one author had written the book. One of my favorite parts was when author Kathy Reichs contributed her chapters. She didn’t so much write a chapter but instead wrote the forensic reports. I have read a few of her books and she was middle of the road to me but after reading her parts, I think I will try her again. I met many new authors to me that I will be checking out. I kept trying to figure out who the killer was and the motive before the story was over. I wanted to see if I could beat the authors but sadly, I did not figure it out until I was suppose to but this did keep the book interesting. Mystery/suspense fans you have got to pick up a copy of this book. Besides, you will be helping a great cause by purchasing a copy of this book. Editing brother and sister team, Andrew and Lamia Gulli are donating their portion of the proceeds to the Leukemia and Lymphoma Society.

Michelle (Red Headed Book Child) said…
I just got my copy and I'm doing a giveaway for it this month too. Great review. I look forward to reading it!
July 30, 2011 at 4:22 PM