My Interview with J. Scott Savage

August 17, 2008
Ok, so yesterday you read my review. Well today you can read my interview. After my interview is instructions on how you can win a ARC copy of Farworld: Water Keep that will be autographed by Mr. Savage himself.


First off let me start be thanking you for doing this interview. I promise I will be easy on you as FarWorld: Water Keep is your first YA book. Hehe

Easy? Does that mean no algebra questions?

Have you always been into fantasy books?

I’ve always been a fantasy reader and lover, but this is my first foray into writing them.

If you could meet anyone died or alive, who would it be and why?

Well I think it would be pretty yucky to meet someone dead. And they’d probably be ticked off at getting pulled out of their graves. I’d love to pick the brains of someone like JK Rowling though, or Stephen King. I’d love to talk writing with them. I know he’s dead, but how cool would it be to discuss writing with Tolkien?

Do you find that your taste in books and movies differ? If yes why.

Definitely. It’s easy to cheat in a movie. Throw in a lot of special effects or action and you can keep the audience interested. I know that’s a generalization, but film is a visual medium and it’s easy to hook the eye. Books are brain food. Your audience is generally more discerning I think. They’re harder to fool. I’m not patient with a movie that doesn’t pull me in because you need to get things moving in a two hour event. I’ll typically give an author a little more leeway.


Ok now onto Round 2. Where the stakes are high and there's no room for losers! Just Kidding. 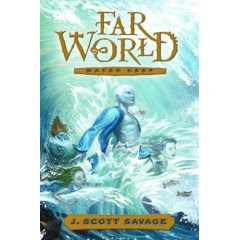 What made you decide to write YA books?

I didn’t choose to write fantasy. It chose me. I started writing this book at 2:00 AM one morning to exorcize a story that wouldn’t leave my head. I knew for a fact that I could not write fantasy, and yet I kept seeing these characters and hearing their dialog. I figured if I rolled out of bed and proved to myself that I couldn’t write it, the story would go away. That has actually worked for other projects in the past. But this time I found myself still writing five hours and five thousand words later. So I went with it.

What did you do when you first heard that your Farworld books would be published and made into a series?

It’s kind of a funny story. I was actually at lunch with the publisher. Lisa and Chris were talking about Disneyland , families, etc. Then they got to the book, and they were talking about what they liked, what edits they’d like to see, school presentations. Finally I was like, “I have to know. Are you going to publish it?” And they were so surprised. They had no idea I was in agony. My wife was actually waiting down in the lobby of the building. So as soon as I could get away, I ran down to tell her. We were so pumped!

I found FarWorld: Water Keep to be kind of like Harry Potter but without all different wizards and school learning. You jump right into the story right away....feet first. I like that. How did you come up with this series?

Well, like Harry Potter, there is a lot more to Farworld than you see in the first book. But you have to jump in with both feet or people will never make it that far. The idea for the series actually came to me over the course of several years.

Your character Marcus has some pretty good powers. So if Harry Potter was to battle Marcus who do you think would win?

Well HP came back from the dead, so that’s a pretty good trick. But I think Marcus is braver. It would be a fun battle. Definitely steel cage death match material.

Which one of your characters would you want to have dinner with?

Master Therapass. He knows so much.

Who have you been compared to?

Well obviously there is the whole Tom Cruz look-alike aspect, and most people think I have the brains or Einstein. But I think I am most often compared to Kermit the Frog. Might be the fly-eating thing.

What can readers expect from the second book?

If book 2 doesn’t absolutely blow you away, you should not read fantasy. It is just that cool!


Guess what. We are done. That wasn't so hard was it? I want to thank you again for spending time with me to do this interview.


You can purchase the book soon here http://www.shadowmountain.com/products/one/87

Here's how to enter to win. Contest is open to US and Canada residents only.


If you blog about this contest and leave your blog link where you did so then you are entered again.


I will pick a winner August 31st. Good Luck everyone.
J. Scott Savage

Susan Helene Gottfried said…
What a fun interview, Cheryl! I hope you interview me when my book comes out.

Anonymous said…
That was a fun interview and I really liked it. I think it's neat that he jumped into fantasy and YA books are usually really entertaining!
doot65{at}comcast[dot]net
Elizabeth
August 17, 2008 at 7:55 PM

Alyce said…
That was an entertaining interview to read. Mr. Savage sounds like he has a great sense of humor.
August 17, 2008 at 8:01 PM

LadyVampire2u said…
Great interview! This is a new author for me but I after reading the summary, review and author interview, I defnitely want to read this book.
August 18, 2008 at 3:37 AM

Ruth Schaller said…
I loved this interview! I love hearing about other fantasy authors. And it's YA. I've read quite a few of those. Enter me in for this contest!
August 18, 2008 at 6:06 AM

Becca said…
This book sounds really cool and I plan to read it no matter what but it would be so much better to be reading a free autographed copy.
August 18, 2008 at 11:25 AM

windycindy said…
Hi, I was trying to find a picture of J. Scott Savage to see the Tom Cruise look alike factor! Fantasy books are great to read. I usually read them and then pass them on to my nephew. Please enter me in your wonderful book drawing. Many thanks, Cindi
jchoppes[at]hotmail[dot]com
August 18, 2008 at 11:52 AM

Chesh said…
This book sounds wonderful! The interview was awesome. Thnks so much for the opportunity.
August 18, 2008 at 12:27 PM

LadyVampire2u said…
Just thought I'd let you know that I worked out the issues with my computer and finally got that post up on my blog about your contest. Sorry it took so long.
Also, thanks for stopping by and commenting. Have a great day there!
August 20, 2008 at 1:12 AM

rhapsodyinbooks said…
Fun interview! I'd love to read it.

said…
That was fun! Good job.